An independent study of Media Transparency in the U.S. Advertising Industry 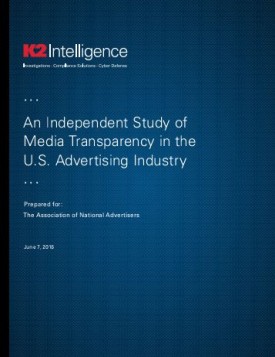 The U.S. Association of National Advertisers (ANA) released the full findings of their Media Transparency Initiative, set to demystify the landscape and provide a clarifying perspective on the state of transparency and on non-transparent behaviors in the market. The study also outlines practical solutions and best practice behaviors that can move the industry forward.

The assessment was conducted between October 2015 and May 2016 by K2 Intelligence, an industry-leading investigative, compliance, and cyber defence services firm. The 58-page study reveals "evidence of a fundamental disconnect in the advertising industry regarding the basic nature of the advertiser-agency relationship".

The non-transparent business practices employed by agencies, some of which may or may not have been contract-compliant, include the following:

These were found across digital, print, out-of-home and television media. In addition, the non-transparent practices were found to exist across the spectrum of agency media entities.

2. As marketing experts and contract compliance specialists, Ebiquity and FirmDecisions, respectively, were commissioned to identify the potential implications for advertisers of the findings contained in K2 Intelligence's study. Their work focuses on contract provisions and principles, and provides best practice advice for advertisers to help them to develop practical solutions.